In 1976 the Village of Fayette, along with many towns throughout the United States, celebrated the nation's bicentennial. After this fun event the people involved said that we should have a yearly celebration in the form of a Festival of some kind. What kind of festival seemed to be the stumbling block. Tom Spiess, a local art teacher, remembered hearing about an ongoing discussion at the coffee shop between two local men. 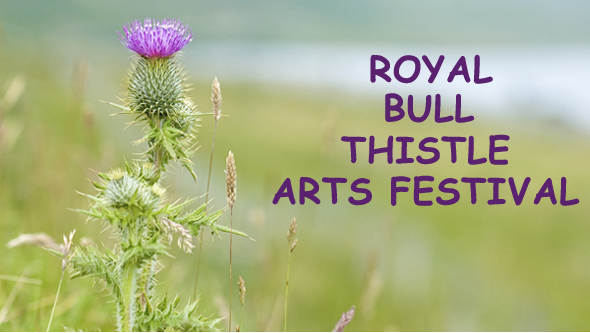 One man was Herb Woodard, the owner/editor of the local newspaper, The Fayette Review, and the other was Jim Marlatt, one of the town's attorneys. These two often had coffee together and both were armed with a lively wit and an appreciation for the absurdities of life. They had listened to several farmers, who also liked to drink coffee and "story" at the restaurant, complain about the thistles and how these pesky plants made farming difficult. They picked up on this conversation and speculated on the positive possibilities of the Bull Thistle plant. The good natured conversation and their enjoyment of "shooting the Bull," so to speak, coupled with Tom's aim for an arts festival brought about the suggestion for a Bull Thistle Arts Festival. Herb and Jim added the Royal embellishment to the name and the rest is history.

Now for a bit of technical information. Cirsium Vulgare, the Bull Thistle, is an invasive plant with beautiful purple flowers that grows here and there across the countryside. It is often associated with areas that have recently been disturbed by natural or unnatural circumstances. Check the Center for Invasive Species for more information. The thistle grows to an amazing height of 12 feet or higher and is festooned with thorns. The stalk has thorns, the leaves have thorns on each point and the base of the flower is a solid orb of thorns or thistles.

The plant can also grow with many stalks that make it a huge bushy type plant. The flower is very soft and is referred to, quite poetically, as the down of the thistle. It also happens to be the national flower of Scotland and can be found decorating many plates, glassware, and jewelry from that country. There are many varieties of thistle. The Bull Thistle is distinctive because of its broad, long, pointed leaves and the fullness of the blossoms. It also has a rather sturdy stalk or stalks supporting the leaves and flowers.

Herb and Jim came up with the idea of cutting down or digging up these plants and entering them into a contest. They would be judged on height, number of blossoms, girth, and fibrous content of the stalk. There would be prizes given for each of these category winners. These prizes are a corn knife, a trowel, a hand cultivator, and a dandelion plucker. There are also two more prizes that are given out for the least desirable and the Best of Show. The least desirable entry wins the Booby Prize of a watering can and the Best of Show wins the coveted "Golden Hoe" award. To embellish these awards, each implement is spray painted with gold paint and adorned with a purple ribbon.

On Sunday morning following the festival events there has long been a community church service in the Normal Grove. This is a regular church service that is held outdoors. Many people enjoy going to church with friends from other churches. These services are for anyone who wants to participate.

It was also decided that a Bull Thistle King and Queen needed to be selected for the event. At first there was a contest where the people were asked to write why and how their partner was "a thorn in their side." The committee would decide which of the essays was the best and that couple would be the King and Queen. In more recent years the King and Queen are chosen by their participation in the festival

The families of both men were brought in, along with some friends, to set up a parade. Local organizations set up booths to sell food to make money for their projects. It was decided to change the fireworks from the 4th of July to the first Saturday in August and further enhance the festival.

Plays were also a part of the festival. Fayette has many talented people who enjoy putting forth the effort necessary to entertain the masses with a stage production. Some of these huge productions directed by Gaylord Parsons, the Superintendent of Schools, included Lil Abner, Showboat, and The Music Man - all presented in the high school gym. These large productions gave way to some smaller melodramas such as Fanny the Fisherman's daughter, and Aaron Slick from Punkin' Crick, which were performed in a tent. In addition to these plays the theater group also did You're a Good Man Charlie Brown and Charlotte's Web. Some of these plays were performed in the Opera House and in the tent as well. These were wonderful productions that entertained the folks of Fayette for many years.

Herb and Jim used to come up with all kinds of ideas about the Bull Thistle. Including the invention of "Marlwood Laboratories" a research lab that would experiment on ways to use the thistle to improve gas mileage and cure cancer. People who listened to these two discuss the possibilities still talk about it today and remark on the tongue-in-cheek hilarity of their discussions. Both of these gentlemen have since died but their influence and memories linger.

The Festival is still going strong and brings many people to our small town to enjoy the celebration of Arts in the Park while eating good food, talking to friends and family and listening to music. Many people stay at Harrison Lake State Park for the weekend so that they can visit the festival and watch the fireworks that night.